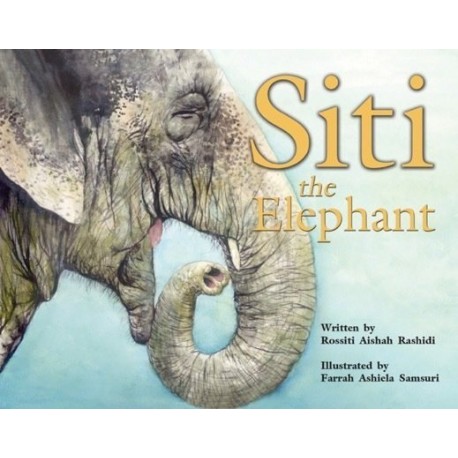 Siti the Elephant is a beautifully illustrated book in realistic style that brings the story right into the reader's heart. Siti is one of the three elephants currently residing in Zoo Negara. Before that she lived free in the wild. But as human beings take over more and more land space, wild animals like Siti the elephant are losing their homes. This book contains many facts about elephants, their way of life and why they are endangered. This is followed by a short story of the five blind men and the elephant. Truly a valuable and informative book to keep and cherish.

DATIN ROSSITI AISHAH RASHIDI is a homemaker, mother of five, writer and environmental advocate. She has written children’s books on wildlife since 2006. Her other published books are Manja the Orangutan and Puteri Tioman the Green Turtle, of which the latter has achieved an Honour List 2014 award for excellent writing by IBBY (International Board on Books for Young People), based in Switzerland. Puteri Tioman was also selected as one of the Top 50 Malaysian Titles for International Rights publication by the National Book Council of Malaysia in 2012 and 2013.

Currently she’s writing and working on Belang the Tiger. Her writings are based on true animal stories, the challenges faced by these animals in order to survive this world of land and space conflict with human beings in addition to pollution. As an environmental advocate she supports many NGOs and community-based groups in greening the country through tree planting events, both in forests and cities. Currently she’s on the Advisory Committee for Shah Alam Trees for Life while motivating people and government bodies to preserve and conserve green spaces within the city through motivational talks and storytelling. She’s also an active volunteer in Zoo Negara, carrying out environmental enrichment and tree planting activities for the three elephants featured in this book.

Other than writing and promoting reading, Rossiti loves gardening, growing herbs and vegetables, snorkelling and cooking for family and friends.

FARRAH ASHIELA SAMSURI just finished high school when she first started illustrating Manja the Orang Utan for Datin Rossiti Aishah Rashidi. She has no formal training in illustrating nor painting. The two publications are not just a manifestation of her development as an amateur illustrator, learning by experience, but more importantly, to be seen as a medium where she found deeper appreciation of the environment and nature at large. She is currently pursuing her Masters in Architecture.

‘Big Strong and Beautiful… It’s a tough world for elephants’. Rossiti’s final quote in her fascinating book about elephants.

In this book about Siti the elephant, Rossiti has continued with the approach she pioneered in her first book Puteri Tioman. This involves combining interesting facts about her subject – a Green Turtle in Pulau Tioman - and the dangerous environment in which they live. Farrah’s realistic and beautiful illustrations help carry the story along.

Siti is an elephant living with two other elephants in a small compound surrounded by an electric fence in Zoo Negara in Kuala Lumpur...

Be the first to write your review !