Suggested Use
As a health supplement, take 2 sachets daily before or after meal.

Storage
Store in a cool dry place away from direct sunlight and moisture. 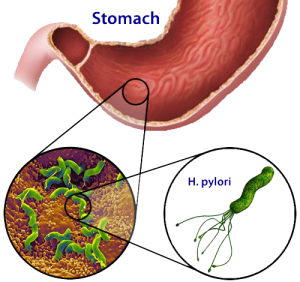 Helicobacter Pylori, or “H. pylori” is a spiral rod shaped bacterium that thrive in micro-aerophillic conditions (requiring low oxygen concentration, much like your stomach environment). To survive in the harsh, acidic environment of the stomach, H. pylori secretes an enzyme called urease, which converts the chemical urea to ammonia. The production of ammonia around H. pylori neutralizes the acidity of the stomach, making it more hospitable for the bacterium. In addition, the helical shape of H. pylori allows it to burrow into the mucus layer, which is less acidic than the inside space, or lumen, of the stomach.

H. pylori attacks the lining that protects your stomach, which weakens the stomach’s lining.The stomach cells then have greater risk of being hurt by acid and pepsin, strong digestive fluids. That can lead to sores or ulcers in your stomach or duodenum.

Once H. pylori establish themselves in the mucosal lining, they cause inflammation and damage, and eventually acid will breach to deeper stomach lining layers, causing ulcers and gastric pains.

H. pylori is commonly transmitted person-to-person by saliva. The bacteria can also be spread by fecal contamination of food or water. In developing countries, a combination of untreated water, crowded conditions, and poor hygiene contributes to higher H. pylori prevalence. Infection mostly occurs during childhood and affects more than 50% of the population.

What are the Symptoms 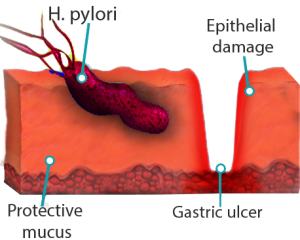 Most people infected by H. pylori, may not have any symptoms at all, but when it does, its usually disturbing. Sufferers from stomach ulcers are likely to have dull aching stomach pains, especially in between meals when the stomach is empty and acid can directly irritate the ulcers. If ulcer bleeding occurs, one may vomit blood or coffee-ground like substance or have bloody stools, sharp pains in the stomach, fatigue, and more. 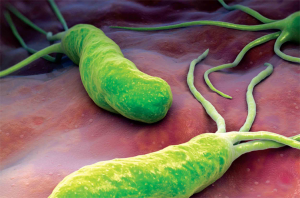 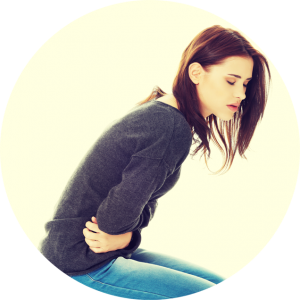 Other Health Issues
Other issues that can be caused by an H. pylori infection include pernicious anemia which is a B12 deficiency. Your stomach produces a protein called intrinsic factor which allows the small intestine to absorb B12. H. pylori affects the stomach’s ability to produce intrinsic factor, which causes this problem. The major symptoms associated with pernicious anemia are constant fatigue, shortness of breath, pale skin, swollen tongue and nausea.

H. pylori disrupts the digestive process, so it can lead to inflammation throughout the gut and gastrointestinal permeability. This state of leaky gut can also cause iron-deficient anemia, irritable bowel symptoms with fluctuating diarrhea and constipation, and ulcerative colitis.

A New and Safe Approach in Helicobacter Pylori Control
Pylopass Lactobacillus reuteri is a probiotic obtained through fermentation of human origin found in breast milk which specifically binds with H. pylori in the stomach to reduce the bacteria load. This unique strain has a special surface mechanism that, when corresponds with H. pylori, it adheres to the surface receptors of H. pylori and is then excreted out of the body through the gastrointestinal tract as shown in the diagram below. 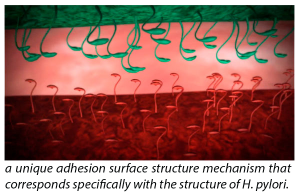 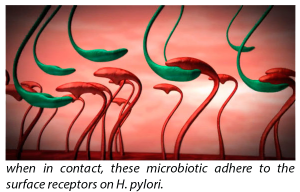 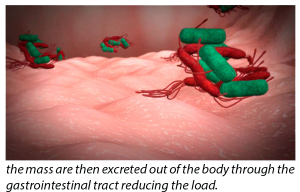 With Pylopass Lactobacillus reuteri in Hylori, it has tremendously reduce loads of H. pylori in the stomach reducing risk of gastritis, gastric ulcers and other forms of ulcers. Clinical studies has shown that at day 14, it has already reduced loads of H. pylori without any side effects. Studies have also demonstrated that this preventive effect lasted for 6 months after just 2 weeks of supplementation period. 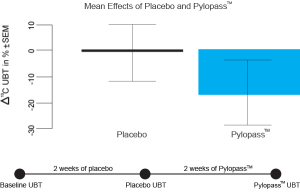