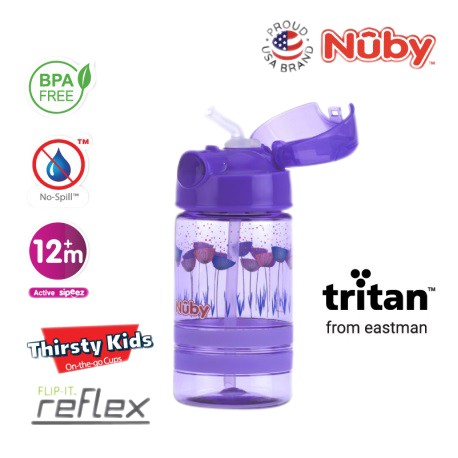 The soft silicone spout is uniquely designed to be delicate and gentle to gums and teeth. The cap is specially engineered to prevent drips and spills when the hygienic cover is closed. The cup is made from break-resistant Tritan™ plastic from Eastman.

And Tritan doesn’t contain BPA, BPS or any other bisphenols. Products made with Tritan material are clear, durable, safe and stylish. And we aren’t the only ones making that claim — the superiority of Tritan has been clearly proven by third-party labs and quality is clearly loved by our customers. See for yourself.

There might be some confusion as to the true safety of plastics claiming to be BPA-free, but we want to set the record straight. Not only is Tritan™ a BPA-free material, it doesn’t contain BPS (bisphenol S) or any other bisphenols. Tritan has been tested by four third-party labs and shown to be free of any estrogenic and androgenic activity (EA-free). Combine that with shatter resistance, and you’ve got a tough material that is safe enough to trust with your family.

What is a polymer?
The term "polymer" is often used to describe plastics and other materials. Literally translated, polymer means "many units." These units are sometimes referred to as monomers, and they are the building blocks that form a plastic. To form a plastic article, these monomers undergo a chemical change that causes them to become connected to each other.

How do I know if a plastic (or polymer) is safe?
Your best way to identify safe plastics is to know how thoroughly they have been tested -- and how reliable are the scientific testing and conclusions. Evaluating a plastic using a comprehensive set of reliable and definitive tests is the best approach.

For your safety, a plastic resin like Tritan must undergo a variety of tests before the U.S. Food and Drug Administration will allow the plastic to be used in products that can come in contact with food or drink. Tritan has been thoroughly tested by independent third-party laboratores using well-recognized scientific methods, and has been cleared by worldwide regulatory agencies for use in products that contact food.

What is BPA?
Bisphenol A (BPA) is a monomer used in some plastics, including polycarbonate. BPA also is used in the interior coatings of metal cans that hold food to prevent deterioration of the metal surface.

Is Tritan made with BPA?
BPA is not and has never been an ingredient or byproduct of the production of Tritan. Validation that the material is BPA-free plastic is supported by extensive testing, using well-recognized scientific methods.

What is estrogenic activity? Androgenic activity?
Estrogen and testosterone are hormones that are essential to many important biological processes in animals and humans, including sexual differentiation and development. Studies have suggested that certain synthetic and naturally occurring chemicals can interfere with these biological processes and lead to adverse effects.

If a product is stamped with a “7,” does it mean that it contains BPA?
No; nor is it a measure of the safety of a product. The number, usually located in the center of the triangular recycle symbol, is called the “resin identification code” and is intended to facilitate sorting of materials for recycling. Currently, resin identification code “7” is for “other” resins that are not defined by codes 1 through 6. Thus, a number of unrelated plastics can carry a code 7, including Tritan, polycarbonate, nylon and even the newer bio-plastics. Many well-known manufacturers identify their products made from Tritan with code 7.

What are the details of the Eastman lawsuit regarding EA?
The purpose of the Eastman lawsuit was to prevent PlastiPure, Inc., and its sister company CertiChem, Inc., from making false and misleading statements about Tritan in commercial materials, attempting to benefit their businesses. during the jury trial, neither the principals or scientists within PlastiPure and CertiChem nor their testifying experts would say under oath that they believed Tritan was harmful to humans.

On July 24, 2013, a federal jury in Austin, Texas, ruled in favor of Eastman against PlastiPure and CertiChem. Through evidence presented during the Eastman lawsuit, the company demonstrated that false and misleading statements were made against Tritan, and the safety of the material was upheld.

The uniformly negative responses seen in these complementary third-party studies overwhelmingly demonstrate that Tritan is free of estrogenic activity and androgenic activity.